If you’ve ever tried your hand at affixing screws to a wall, you’d know how difficult it is to fix them straight. Now, here’s an artist, who’s not only an expert in affixing them, but creates art using thousands of screws! Meet California-based Andrew Myers, who is gaining fame for his incredible art that he has termed ‘Screw Art’.

What makes Myers Screw Art stand out is his play of light and shadow by means of screws. He uses hundreds and thousands of screws to create realistic portraits, and his other works, by combining oil paint and shadows. He has skillfully honed his craft of precise drilling of screws to create the art that helps him add depth to each piece. Just imagine, screwing zillions of screws in the right proportions to create life-like portraits and other works of art. Undoubtedly, a time-consuming and back-breaking effort.

According to Myers, he has dedicated the last two decades of his life in pursuit of art. What inspired him to become a full-time artist at the age of 20 was a guided tour of a sculpture room at the Laguna College of Art and Design. It was the motivation he received at this art tour that made him choose art, more specifically sculpting, as his future career. For him, it became a “true passion and overall reason for being”!

Myers invented Screw Art in 2008, more out of necessity than passion since it was the time when the market had crashed and people were not spending money on art. And his only hope was to create something that people had not seen before, to make it sell.

Myers, currently based in Laguna Beach, California, US, was born in Braunschweig, Germany and spent his childhood in Ciudad, Spain. While at Laguna Beach, he joined the Laguna College of Art and Design and trained to become a classical sculptor.

Myers has showcased his Screw Art in many shows. His creations are also featured in many magazines, such as Readers’ Digest, The Marriott Traveler, and many more. His works have earned him many honors and awards too. 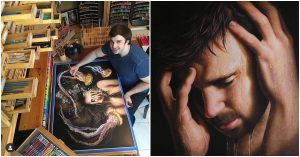